Posted on 20 September by orwelldiaries

Lathes used by Jewish carpenters who make the string-seated chairs etc. are of extremely primitive type. There are two clamps, the left one fixed, the right sliding upon a metal rod, with a metal point in each. The bar of wood to be turned is fixed upon the two points & turns itself, the points being stationary. Before it is put on the string of a bow is looped once round it. The carpenter holds the movable clamp in place with his right foot & works the bow with his right hand, holding the chisel in his left hand & steadying it with his left foot. In this way he can turn a piece of wood apparently as accurately as on a proper lathe, judging by eye to about 1/100 inch. Working the bow makes the wood revolve around at an astounding speed.

The earth walls here are made out of earth which is dug out at a depth of 4-6 feet, either because this is different earth or because at this depth it is easier to find it damp enough to be workable. It is a peculiar chocolate colour & it dries into the light pink distinctive of this town. Having been dug out it is mixed with rubble & a little water, then cast in sections in a wooden frame, just like cement, but when in the frame it has to be packed together very hard with heavy rammers. When one section is hard enough to stand unsupported the next is made, & the joints do not show, the mud setting almost like cement. 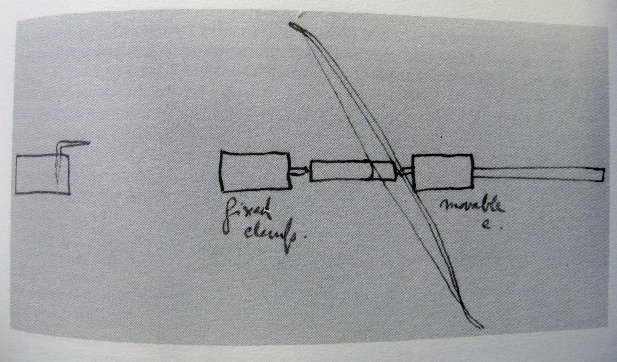 These mud walls are said to stand many years in spite of torrential rains.

The orange trees which grow in the street here are of an inedible bitter kind. This kind is used as stock for grafting the sweet orange on.

Some of the olive trees here have, among the ordinary green olives, a certain number which are bluish-red, though apparently ordinary in every other respect.

The superstition that it is lucky to touch a hunchback apparently obtains among the Arabs as well.

Today stiflingly hot about midday, otherwise somewhat cooler, though we did not want a coat till about 6-30 pm. We have not yet had a day when it was clear enough to see whether the Atlas mountains have snow on them or not.